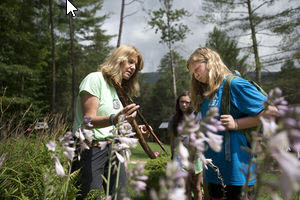 During their last hike of the week, four middle school girls showed off their survival skills when they came across a small “crashed” plane and one of their “injured” counselors.

The girls were told their plane had crashed in the woods, counselor Dani Derringer was injured, and they needed to work together to survive while they waited for help to come.

The simulation was the culmination of a weeklong camp, called Girls Empowered at Mountain Shepherd, that taught the girls survival skills and how they can be applied to everyday life.

Mountain Shepherd Wilderness Survival School is on 100 acres in Craig County. Most of the property is forest, with an outdoor classroom located about a quarter-mile down a trail. Campers can sleep in bunks or in tents on the property.

GEMS was the brainchild of Dina Bennett, who teaches a January-term course at Hollins University called Survival for the Modern World. She and her husband own Mountain Shepherd and teach a variety of survival courses there. She connected with one of her students, Kayla Deur, and together with Derringer, who teaches high school math, they began to develop the idea for the camp.

All three women felt strongly that it should be just for girls.

“I think it was a natural decision to do it just for girls, because boys, in my mind, have this opportunity and this experience a lot more often,” Deur said.

Bennett said it was targeted toward middle schoolers for a reason: “It’s a very critical time in their lives for maintaining their confidence and their strength to make their decisions as they move on through school.”

The girls learned about the seven priorities of survival, a list of the most important things to take care of if stranded in the wilderness that includes first aid, fire building and signaling.

Jordan Jennings, 12, of Salem said building a fire was her favorite skill to learn. Lily Webster, 12, who’s also from Salem, was torn between fire and shelter building.

Bennett said the most important priority is having a positive mental attitude — or PMA, as they call it during camp.

“If you are in a survival situation it is very important because if you are thinking negative about the situation that you are in, it’s going to cause you to do a lot worse choice than you would have if you had a positive [attitude],” said Allie Mitchem, 11, of Salem.

These skills aren’t just for the wilderness.

“We talk through things like bullying and use some of the hard skills they’re learning as metaphors for how to deal with those bigger social situations,” Deur said.

With the girls gathered around her, Derringer spoke about how a positive mental attitude and first-aid skills can translate to everyday life. PMA, she said, is about making sure you’re OK before you focus on anyone else.

“First aid is a really obvious example of that,” she said, “but there are friendships or times when things become so heavy and so difficult that you have to take some time for yourself to be healthy and put back together, and then you can return to helping others that you care about.”

And the lessons seemed to stick with the campers. When asked how she can use the skills she’s learned in everyday life, Lily said, “Fire is kind of like, it’s rough and it’s hard to do, but you can’t give up. And it’s kind of like that. You can’t give up on life.”

Derringer said the camp can be transformative for the girls.

“A couple of them have a hard time voicing what they’re feeling, putting words to what they need and what they feel,” she said. “Throughout the week they’ve been able to hear and get suggestions and now they’re more able to clearly communicate what’s on their mind.”

“I feel like I’m confident now,” she said. “When they taught me how to make shelters and stuff, I thought, if I’m out in the woods by myself, I should have a positive attitude. And I should work by myself and make shelter and do all these awesome things that I’ve never learned before.”

The camp also pushes girls out of their comfort zones. Part of the food-gathering lesson was learning which insects are edible and which are not. Both Jordan and Allie ate ants.

“I was a little nervous at first, but then when you like put it in your mouth and you chomp it up it’s just like, it wasn’t bad,” Allie said. “It was a really cool experience because you had to, like, trust that it’s not going to hurt you. It’s just a source of protein.”

But the camp doesn’t just use survival skills to teach confidence. On Monday, girls identified their superpower and their superhero confidence pose, which they struck throughout the week whenever they did something they were proud of. They also made capes with their superhero emblem.

“It might come back two years from now, or next fall in the classroom, as they’re sitting there, and there’s an experience. It’ll click later. There’s that seed growing,” she said.

When the survival scenario was done, the shelter was built, the fire was lit and “help” had arrived, the campers and counselors all struck their superhero poses.

The girls had only a couple of hours left at camp, and as Bennett looked over the departing group, there were tears in her eyes.

“It’s exactly what I wanted it to be.”