Ruth Bader Ginsburg, or “R.B.G.” as she is often called, is well-known for breaking down countless gender barriers during her career as an academic and legal professional. She is an active advocate for women’s rights and gender equality. Ruth is only the second woman appointed to the U.S. Supreme Court, following in the footsteps of Sandra Day O’Connor. We admire Ruth’s steadfastness, her quiet courage, and her passion for education and equal opportunities for women. She is the epitome of a #StrongWoman.

Ruth was born to Jewish parents and raised in a working-class neighborhood in Brooklyn, NY during the Great Depression. Her father was a merchant who sold furs (during a period when no one could afford such luxuries) and her mother worked in garment factories. Ruth’s mother sacrificed her own educational opportunities to work and provide funding for her children – Ruth and her brother – to go to college. Ruth grew to share her mother’s passion for education and she succeeded in all academic endeavors – even her husband’s! (Apparently, Ruth attended her husband’s Harvard law classes, took notes for him, and typed up his papers as he dictated to her while he was undergoing treatment for testicular cancer. She even maintained her position at the top of her class while doing twice the work!)

As an attorney during the 1970’s, Ruth argued some of the Supreme Court’s most important women’s-rights cases in history. In fact, she has been called “the Court’s most accomplished litigator” by The New Yorker. She holds degrees from Cornell University, Harvard University, and Columbia University. She has been a professor at both Rutgers and Columbia Law Schools. She spent a portion of her career advocating as a volunteer attorney for the American Civil Liberties Union, where she co-founded the Women’s Rights Project. The Project participated in over 300 gender discrimination cases between 1972 and 1974 under Ruth’s guidance. 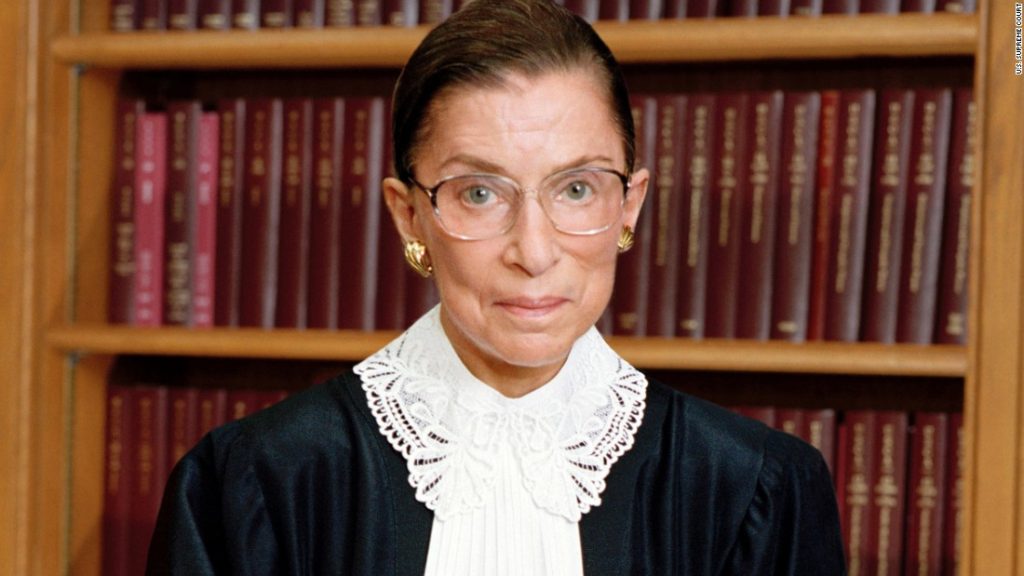 In addition to these accomplishments and many, many others, Ruth has spent much of her education and career as the only woman, the first woman, or one of very few women doing what she has done. She is a true trailblazer in that sense, and has shown courage through every such situation. She was the first woman elected to the Harvard Law Review publication, was one of 9 women in her Harvard Law School class of 500, and upon graduation, was rejected by many law firms and judges as they refused to hire a woman. Ruth then turned to teaching, where she was one of only 20 women teaching law during the 1960’s and 1970’s, and she became the first female tenured professor at Columbia Law School.

For her personal and professional dedication to gender equality, Ruth has been called “the Thurgood Marshall of [her] cause” by colleagues, and indeed, she was awarded the American Bar Association’s Thurgood Marshall Award in 1999 for her work and advocacy. Ruth’s career is riddled with accomplishments and broken-down barriers, and for that and many other reasons, we deem her a #StrongWoman!